The Gaiety School of Acting Class of 2021 presents Rogue 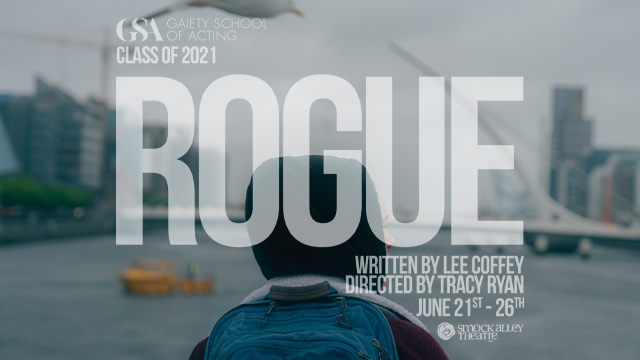 “Most of us enter this world.

To find love and laughter.

Then for some poor nippers.

Rogue follows the breakneck journey of a young Dublin woman as she races from domestic abuse to homelessness, until ultimately breaking through adversity to hope. Rogue holds a mirror up to the homeless crisis in Ireland, with the protagonist’s trajectory depicting the stark reality of how precarious any individual’s living situation truly is.

Written by critically acclaimed playwright Lee Coffey and directed by Irish Times Award winner Tracy Ryan, Rogue will be performed by the Gaiety School of Acting’s graduating class of 2021. The play promises to be a fast paced energetic experience that is underpinned by heart and connection; something which is synonymous with the work of both Coffey and Ryan.

Rogue is not only a significant production in that it will serve to launch 15 new actors into their careers, but it will also be the first play to be staged in Smock Alley Theatre for a live audience in seven months.

There will be just 6 tickets on sale for each night, with a live stream also available for purchase.

This will be the 45th original production commissioned by the Gaiety School of Acting for their graduating class. The School will mark 35 years since opening in October 2021 and is proud to have trained hundreds of prominent actors of stage and screen including Colin Farrell, Aidan Turner, Sarah Greene, Deirdre O’Kane to name a few.

Lee Coffey is a writer based in Dublin. He is a founding member and Artistic Director of contemporary theatre company Bitter Like A Lemon.

He was one of six writers selected for the 2018 New Playwrights Programme to mark the Lyric Theatre Belfast’s 50th year celebrations. He was a participant in Six In The Attic in 2018 – 2019, an Irish Theatre Institute initiative to support and promote emerging creative talent. He was also a participant in the prestigious Rough Magic SEEDS programme in 2016 – 2017.

Lee’s play In Our Veins – commissioned by Dublin Port Company – had a hugely successful run on the Peacock Stage at The Abbey Theatre in 2019 and is published by Samuel French. His debut play Leper + Chip has been performed to great acclaim at Theatre Upstairs, Project Arts Centre, Edinburgh Fringe Festival (nominated for the Broadway Baby 5 Star Award and the National Student Drama Award for Best Play) Electric Picnic, Lyric Theatre, Belfast and axis:Ballymun, Cork. It was also produced by Inis Nua Theatre Company in Philadelphia, USA. Other productions include Peruvian Voodoo (Theatre Upstairs), Slice, the Thief (Smock Alley, axis:Ballymun), Murder of Crows (Theatre Upstairs, Project Arts Centre, Garter Lane, Lyric Theatre Belfast), From All Sides (Dublin Fringe Festival), The radio play The Matron as a part of Dead Air (Bram Stoker Festival) The Tenements (Collaborations, Smock Alley) and 24 Hour Plays (Abbey Theatre). In 2020 Leper + Chip and Slice, The Thief were adapted for film as a part of Dublin Port Company’s The Pumphouse Presents: alongside axis:Ballymun, Anu and Fishamble.

Lee was recently awarded an Arts Council Commission Award to write his new play The Fortune Brothers for axis:Ballymun. He is also developing new work with Livin’ Dred, The Abbey Theatre and his television series “Dead Professional”. He has also written plays for Inchicore College of Further Education and The Gaiety School of Acting.