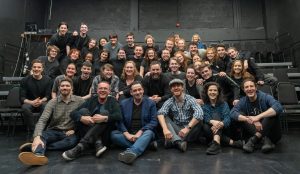 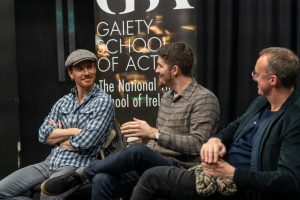 Also present to inspire the students was Agent and Producer Conor McCaughan from Troika Talent, and screenwriter Joe Murtagh, both of whom were also in Dublin for the premiere of their film Calm with Horses. Calm with Horses opened in cinemas nationwide on March 13th. It is no surprise that this drama set in the West of Ireland stars a plethora of Gaiety School of Acting graduates such as Ned Dennehy, David Wilmot, Simone Kirby and Toni O’Rourke.

As a friend of the school, and former student of GSA tutor, Donal Courtney, Michael Fassbender was delighted to impart knowledge from his extensive career to the students, emphasising the importance in self belief and hard work, which form a winning combination for success. The Gaiety School of Acting tutor, Donal Courtney, was Fassbender’s first acting coach, and to this day, Michael cites Donal as being one of his mentors. 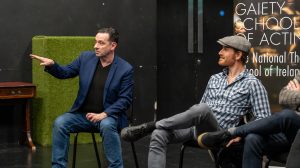 With a vast list of notable alumni ever present on stages and screen nationally and internationally, the Gaiety School of Acting remains Ireland’s premiere drama training facility. With courses starting for all ages in Drama, Confidence Edge, Acting for Camera and Stand-Up Comedy, why not see if you can be Ireland’s next Hollywood star by signing up to one of our courses today!

You can sign up to any GSA course either online or email info@gaietyschool.com #LoveGSA