Animalia is showing at the Tiger Dublin Fringe from September 12th at Smock Alley Theatre – a play written by graduate Ian Toner, directed by graduate Sarah Finlay and starring graduates 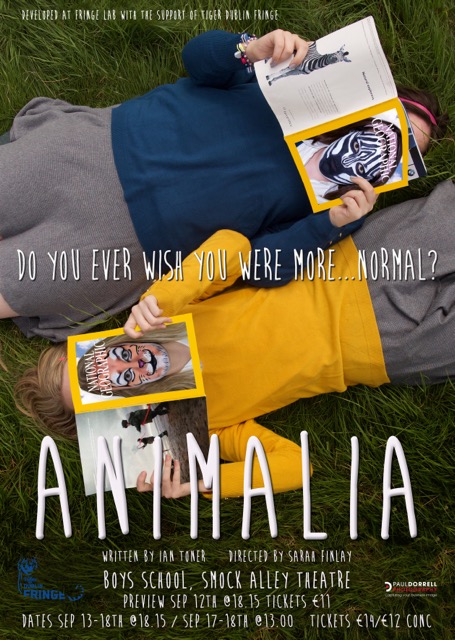 Louise O’Meara and Ashleigh Dorrell, its quite the GSA affair! Ian took some time to talk to us about what Animalia is about, kids today and what his favourite chocolate bar is.

So Animalia is about two eleven year olds – is it a play to be enjoyed by kids, adults or both?

It’s written as a play for adults, exploring that age in people’s lives from an adult perspective. Being on the verge of adolescence is one of those handful of deeply challenging periods that everybody goes through, and this is a play best enjoyed with hindsight, knowing that you survived. There is also a nostalgic quality to it that we know from work in progress showings audiences really enjoy. It’s a nice shared communal experience, remembering our halcyon (and somewhat horrific) schoolyard days. And the play really goes for that angle.

Can you give us a brief synopsis on what Animalia is about?

Animalia is about two quite different 11 year old girls. Danielle is the more socially capable of the two, her and her friends are interested in boys and make up and general adolescent concerns. Sarah is seen as ‘the weird kid’ in class, she still has childish obsessions with animals and finds it difficult to connect with others. One week, the two are thrust together in an unexpected way and we watch their relationship develop, and each find a certain solace in the other. It has quite an unusual style to it, both actors are forced to work very hard playing lots of different characters and this playfulness really captures that frenetic schoolyard energy. It is a play about two people discovering their place in the world, whether they like it or not. It uses the schoolyard as a platform to explore human behaviour, and the idea that humans are pack animals, and explores the lengths we will go to just to belong.

Do you think kids have things tougher today than twenty years ago or is it just perceived that way?

It’s hard to know what it must be like to grow up in a different time. I don’t think kids who are 11 now are that different from my generation, but if you were to go back to my parents generation that is a massive difference. My parents grew up in a Catholic conservative society, and kids in 2016 are growing up in a much more liberal society, and each of those comes with their own difficulties. I think kids are exposed to certain things at a much younger age now, and expected to grow up sooner. Probably the biggest change is the prevalence of social media in the lives of kids today. That is especially worrying when you consider online bullying and such. People can be quite removed from the human effect of things they say and do online, and I find that deeply troubling.

And finally – would a penguin be your bar of choice or what would you go for?

Possibly a jammy wagon wheel. Although I’m not sure if that’s a bar or a biscuit. It’s a metaphysical conundrum. I also seem to remember a limited edition jaffa cake that was covered ENTIRELY in chocolate, although perhaps that was just a magnificent dream.