This lockdown has caused a monumental shift in the way that many people access and view theatre. They are no longer only witnessed by a live audience who are present at the time and place of performance, instead they are now live-streamed, recorded, reported on and broadcast in clips and headlines across social media platforms, such as YouTube, Facebook, Instagram and Twitter. From their online accounts, people are able to comment instantly on the extracts or clips of performances and share their opinions with the public and the artist directly. The Abbey Theatre’s most recent production “Dear Ireland” was hosted on YouTube and had time slots built in to allow the audience members to comment on the performance they just saw. This alters the way the audience interacts with an actor and their material. So what is this new way of viewing performance where the audience members instead of filling auditoriums scroll social media sites and react with the cry laugh emoji?

Unlike the singular event of a live performance, clips and videos online are created to be replicated 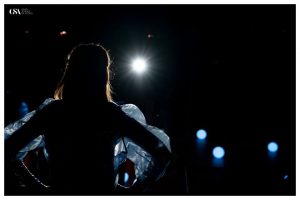 and repeated. This could be seen as diluting the value of the performance. By making so many reproductions are we substituting quantity for quality? Watching a theatre show online loses the liveness of performance – it no longer exists in one place and time. The traditional way of viewing online performance is to view it as just an extension of the original rather than a performance in its own right. The original performance or live event as ‘real’ and mediatised events as a poor substitute that cannot compare. For example, the National Theatre in London has made available some of their greatest shows for the public to watch on YouTube – is the viewer part of the audience watching the performance or are they simply watching a video of it? Is it comparable to seeing it in London?

Rather than comparing online performance to live performance, it is more interesting to understand the relationship between the two. Instead of viewing performances online as a band-aid to carry us until we return to ‘normality’, it is more creative to view them as performances in their own right, while also acknowledging that they came from an ‘original’ live performance. This allows each different person watching the performance to become part of a wider audience, even if they are alone at home, whilst honouring the audience who attend it in person. This is exciting for theatre as it retains the value of being part of an audience viewing a live performance while making space for you to still be an audience member while stuck in your living room. The actors of “Dear Ireland” may not have had live audiences but watching from our sofas we were all audience members to their performances. Going to the theatre may continue to look pretty different for the next while but as the most creative industry, artists and audience members can have a lot of fun finding new ways to create and share in performance.