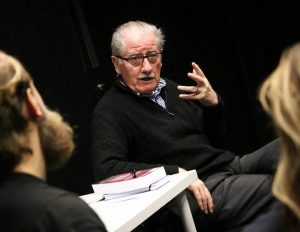 The Gaiety School of Acting Shakespeare in Schools Programme is delighted to announce international theatre director Joe Dowling as the director of this year’s Leaving Certificate production of Hamlet. Having directed in theatres from the West End to Broadway, in addition to serving as The Abbey Theatre’s youngest ever artistic director, Dowling most recently completed a 20 year tenure as director of The Guthrie Theater in Minneapolis, and will be bringing this incomparable wealth of experience with him as Hamlet tours the country this autumn.

Joe Dowling has a long and special relationship with the GSA, having initially founded the School in 1986, in what was a significant milestone in theatre history in Ireland. Thirty-three years later the Gaiety School of Acting proudly stands as the National Theatre School of Ireland providing world class professional actor training, with its alumni treading the boards in theatres across the country and the globe, and appearing on television screens and in cinemas worldwide. The GSA is honoured to welcome Dowling back to direct this year’s Leaving Certificate production of Hamlet, as the Shakespeare in Schools programme enters its 7th year, and aims to reach its 50,000th audience member!

Not only does Joe Dowling bring with him a deep seated connection with the Gaiety School of Acting and an impressive history in theatre in general, he has directed myriad Shakespeare plays in his time, and has an innate understanding for how the bard should be brought to life for an audience. Among Dowling’s Shakespearean credits are his production of Othello at The Abbey Theatre, The Tempest at The Old Globe Theatre, San Diego, A Midsummer Night’s Dream at Chicago Shakespeare Theatre, and of course Hamlet at The Guthrie Theater.

To see Joe Dowling interpret Hamlet for an audience of Leaving Certificate students will be a transformative experience for audiences at the Firkin Crane in Cork, The Dean Crowe in Athlone and Smock Alley Theatre Dublin this Autumn. With limited availability at all venues, and exciting cast announcements due in the coming weeks, we recommend teachers to book as soon as possible.

Bookings can be made by calling 016799277 or emailing shakespeare@gaietyschool.com

You can find out more here.